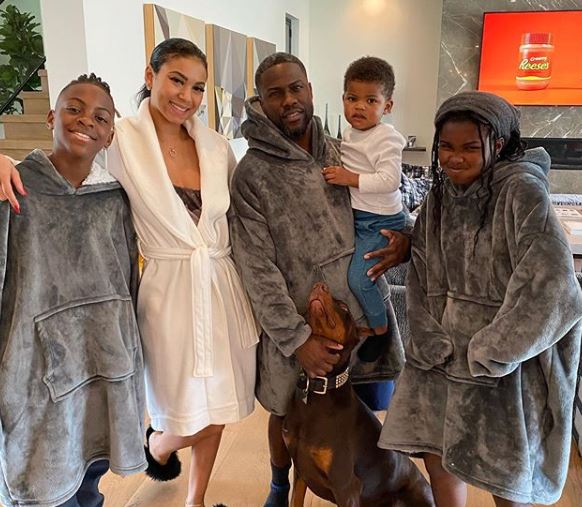 Comedian and actor Kevin Hart talked about quarantine life with his family in an interview on the Ellen Degeneres Show. The star is currently social distancing with his three children and wife, Eniko, who is expecting their second child.

During the interview, Kevin joked that he has been getting on his wife’s nerves. He shared in part; “She’s not getting on my nerves. But she’s saying I’m getting on her nerves. And you know, whatever. I don’t fight it. But apparently, I’m annoying.”

He also shared that his kids pointed out that he can’t relax saying in part; “That’s what they’re talking about around the house, saying that I’m just ‘always around’…. And they say, ‘Dad, you always want to do stuff. Just chill. And I’m like, I thought doing stuff was chilling.”

Kevin added that he’s enjoying quality time with his wife ahead of the arrival of their baby girl. He said in part; “Like normally, I’m in and out. So it’s been a real blessing just to be around and talk, converse, you know, and just kind of be with the fam through these months. So this is the first time that I’ve ever been here this much through a pregnancy in general in my life. So it’s been refreshing.”

Kevin Hart talks about quarantine life with his family. Take a look at the interview.